What does the Quad do?

The Quad, officially the Quadrilateral Security Dialogue, is a group of four countries: the United States, Australia, India, and Japan. Maritime cooperation among them began after the Indian Ocean tsunami of 2004. But today the countries—all democracies and vibrant economies—work on a far broader agenda, which includes tackling security, economic, and health issues.

Over the years, the Quad’s diplomacy has waxed and waned. It is a loose grouping rather than a formal alliance. Japan initially emphasized the democratic identity of the four nations, whereas India seemed more comfortable emphasizing functional cooperation. Australian leaders have been reluctant about creating the impression that the group is a formal alliance.

As of 2021, leaders in all four countries have become more aligned in their shared concerns about China’s increasingly assertive behavior in the region and are more willing to define a constructive agenda of cooperation. All four navies participated in their first joint exercise in over a decade in November 2020. And in March 2021, U.S. President Joe Biden convened a virtual Quad meeting attended by Australian Prime Minister Scott Morrison, Indian Prime Minister Narendra Modi, and Japanese Prime Minister Yoshihide Suga. They formed working groups on COVID-19 vaccines, climate change, and technological innovation and supply-chain resilience.

What are U.S. interests in the Quad?

The Indo-Pacific spans two oceans and several continents, making it important to U.S. maritime interests. In 2019, $1.9 trillion [PDF] worth of U.S. trade passed through the region. This year, 42 percent of the world’s exports and 38 percent of global imports are expected to pass through, according to a UN report.

China’s growing willingness to challenge the regional status quo worries Washington, and Beijing’s challenging of democratic values over the past year has deepened other Quad partners’ concerns as well. China’s pursuit of its regional interests—including its crackdown on Hong Kong’s freedoms and criticism of nations that take issue with its actions—has not been slowed by the COVID-19 pandemic. However, the Quad’s agenda is not all about China. Leaders of the four nations also see a need for a more proactive approach to solving humanitarian and economic challenges caused by COVID-19.

What are Japan’s aims for the Quad?

Former Japanese Prime Minister Shinzo Abe was a strong believer in the Quad’s power to ensure a “free and open Indo-Pacific.” Abe worked to persuade the Trump administration of the value of this coalition approach across the Indo-Pacific.

Japan depends heavily on open sea lanes for its trade with the world. The U.S. and Japanese militaries already work closely across the region, and Japan’s Self-Defense Forces have slowly built relationships [PDF] with their Australian and Indian counterparts. Similarly, Japan has played an important role in supporting investment [PDF] in manufacturing, trade, and infrastructure development across the region.

Japan and its Quad partners share concerns about China’s role in the region and Beijing’s challenges to the rule of law. Beijing’s assertion of its sovereignty in the South China Sea, as well as Chinese provocations toward islands China and Japan both claim in the East China Sea, has made Tokyo wary of China’s military build-up. Strategic consultations with other Quad partners are vital.

Similarly, Japan is watching carefully as China imposes economic conditionality on countries in the Indo-Pacific, and it wants to offer Southeast Asian countries alternative sources of assistance and commerce to offset China’s growing influence. Tokyo has joined with Washington and Canberra to deepen the funds available for quality infrastructure. Bolstering the resilience of the Quad nations, especially for critical supply chains for goods such as semiconductors, will also be a Japanese priority.

How has China responded?

China’s relations with each of the Quad members have become more tense during the pandemic. U.S.-China tensions remain high; Beijing’s frustration was conspicuous when the new Biden foreign policy team had its first meeting with its Chinese counterpart in Alaska in March. Australia continues to bear the brunt of Chinese economic sanctions after suggesting a World Health Organization investigation into the origins of COVID-19 last year. India and Japan have clashed with China over territorial disputes. China’s ambassador to Tokyo has publicly criticized Prime Minister Suga, claiming that the new Quad diplomacy reflects a “Cold War mentality” and that it is “100 percent outdated.” In addition, recent polls have shown negative views of China have soared among publics across the region.

Yet, few policymakers in the Quad countries see an advantage in trying to contain Chinese influence militarily. Instead, the Quad leaders have emphasized cooperation across areas of shared interest to bolster confidence in the democracies’ ability to counter China’s assertion of regional influence. As long as tensions with China remain, the Quad’s agenda is likely to expand as the democracies of the Indo-Pacific seek to balance China’s growing power./. 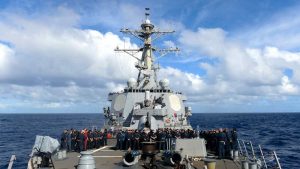