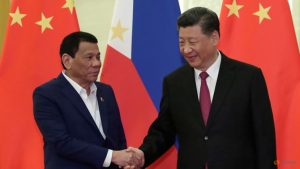 The two leaders held an hour-long telephone summit on Friday, discussing a broad range of topics including concerns over the Ukraine crisis and COVID-19 pandemic responses.

“The leaders stressed the need to exert all efforts to maintain peace, security and stability in the South China Sea by exercising restraint, dissipating tensions and working on a mutually agreeable framework for functional cooperation,” the presidential office said in a statement.

Both parties were committed to broaden the space for positive engagements even as disputes existed, Duterte’s office said.

Since taking office in 2016, Duterte has pursued warmer ties with Beijing, setting aside a longstanding territorial spat over the South China Sea in exchange for billions of dollars of aid, loans and investment pledges.

The two presidents spoke of the importance of continuing discussions and concluding the code of conduct on the South China Sea.

An international arbitration ruling in the Hague in 2016 invalidated China’s sweeping claims to the waterway, through which about US$3 trillion worth of ship-borne trade passes annually. The case was brought to the tribunal by Manila.

In March, the Philippines filed a diplomatic protest over a Chinese Coast Guard vessel engaging in “close distance manoeuvring” that heightened the risk of collision in the disputed waterway.

Duterte and Xi renewed calls for a peaceful resolution of the situation in Ukraine through dialogue, and pledged to work together in addressing the impacts of climate change, the presidential office said.